3 Things I Learned from My Father that I Use Daily

Church Logo Branding : Be Known for Something / Business Essentials  / 3 Things I Learned from My Father that I Use Daily

3 Things I Learned from My Father that I Use Daily

Happy Father’s Day! Today is the day that we honor the guy who was our male leadership while growing up.

Think about most of your relationships and friends — how many Fathers of them do you know? If you’re anything like me, I rarely know their Fathers (or even met them)! Isn’t that weird? But so much of who we are, is based on who our Father was (or is). Your friend probably turned out the way they are (at least partially) because of their father’s influence. And so did you and I. 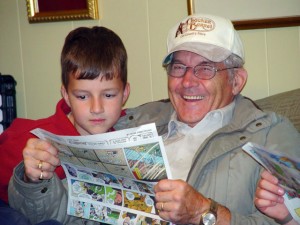 I confess that I’ve been heard to say, “I hope I don’t turn out like my Dad.” We haven’t really had a close relationship. I could tell you possible reasons I think that happened, but perhaps that’s another time and only for very close friends. But the older I get, the more I see how my Dad has influenced me.

And today I honor him (as the Bible commands us to do).

I’m a Creative Director. And I do believe (even though I know my Dad couldn’t tell you what I do specifically in my career) that he, Abner Donald MacDonald, paved the way to who I am and what I do every day. I suppose I should stop at his name, and tell you he hates his first name, so he always was known for his middle name, Donald. And it’s that name that I was given for my middle name. It’s unusual, but it’s distinctive.

Here’s the 3 things I learned (in retrospect) from my Dad.

I’m sure if I thought a bit more, I could come up with even more ways that my Dad has influenced me. Some for the bad, but many for the good. And although he’s gotten old and his body and mind are failing him, I honor him for the sacrifices he and my mother made for me. And as I live my life and replicate similar “life” circumstances, I start to understand more about the reasons for his behavior.

Thank you Dad for who I am!